Now in her 104th year, history has found an interesting way of repeating for Neutral Bay centenarian Marjorie Ewington.

Mrs Ewington finds herself living at Lansdowne Gardens’ retirement facility more than 65 years after she made her first home with her late husband at Lansdowne guest house.

She lives in a second building that has been opened up as an extension of the facility, but travels regularly to eh building which was once her honeymoon home to get her hair done and for other appointments.

Mrs Ewington said the building had significantly changed from when she shared it with her husband Ron, to whom she was married for 46 years. When she talks of meeting her husband, along with a bedraggled looking but nice bunch of cricket teammates on a boat during a trip to Lord Howe Island, her enduring love is evident.

“Ron was the only one who stood up and said “how do you do?” I thought, you get good marks for that and by the time the holiday was over we both knew this was it.” she said. Mr Ewington called his future bride as they returned to their homes. Soon after, however, World War II was declared and he went to serve in the RAAF, delaying their courtship. “We would have married before he went away, but he didn’t want to come back (to a marriage) maimed. He ended up proposing to me by letter. ” she said. 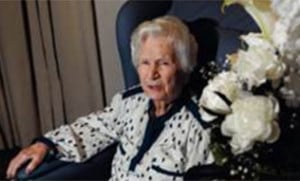